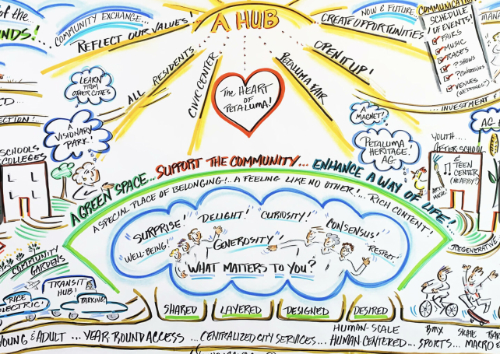 On September 23, 2021, Linn Davis (Healthy Democracy) and Wayne Liebman (Public Access Democracy) traveled to Sacramento for the California League of Cities Conference, an annual gathering of mayors and city council members from across the state. They presented a workshop on Lottery Selected Panels as an out of the box technique to approach difficult municipal decisions. About 200 municipal government personnel attended the presentation, including the city manager of the northern California ciry of Petaluma (pop. 60,000).

As a result of the presentation, in April, 2022 the Petaluma city council budgeted $450,000 for a Citizens’ Assembly chosen by lot to recommend a plan for the future use of its municipal fairground–a contentious issue that had been plaguing the city for several years. The plan passed the city council unanimously. The Petaluma CA is the first municipal citizens’ assembly in California.

The assembly panelists met for over 80 hours between mid-May to mid-July, hearing from experts and stakeholders, and engaging in a facilitated deliberative process moderated by Healthy Democracy. They were tasked by the city to answer the question: “How might we use the city’s fairground property to create the experiences, activities, resources, and places that our community needs and desires now and for the foreseeable future?”

The panel concluded its deliberations on July 17 and presented its recommendations to the Petaluma City Council and to the 4th District Agricultural Association (the state board currently administering the fair). The CA’s report, written entirely by the panelists, delineated the values, options, and visions that the panel had identified for the fairgrounds, and is accessible on the Healthy Democracy website. The panel process reflected the promise of deliberative democracy–to stand apart from traditional back room, political horse trading and instead focus on evidence and collaborative problem solving that places the community at the center.

The principal effect of the assembly’s work may not be apparent until 2023, when the city has to decide on a course of action. The assembly’s effect won’t be measured by how creative, startling, or beautiful the eventual solution is. It will be measured by whether or not the city and the state board can come to an amicable resolution that permits them to move beyond their current deadlock. But it’s already clear to the city council and the state board that the panelists are modeling a novel, structured, “yes, and” rather than “yes, but” process to solving problems, an approach outside usual political paradigms involving debate, power, conflict, and authority.

Moreover the assembly table incorporates a richness of lived experience unavailable in elected or appointed bodies, enabling panelists to think deeply about the complexity of the city and its issues. Will this example catalyze the governmental bodies to set aside politics and find common ground founded in the collective wisdom of everyday people from all walks who listen to each other?

Based on the example of past assemblies, we may hope. Stay tuned.